The Requiem Mass for Harriet Blow 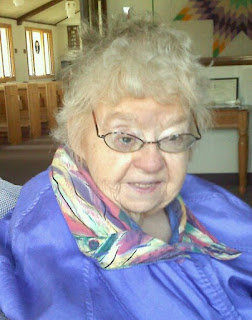 To be honest with you, I thought this Requiem mass this morning would be celebrated in May or June. But it did not.

When she was born on November 17, 1933, she was quickly baptized within four days because it was not believed she would live. Today, on this day, we celebrate the long and amazing life of Harriet Blow. And she was amazing.

Here was a woman who, by the standards of this world, was a small woman with malformed arms, unable to walk, partially blind, essentially deaf. She was, by the world’s standards, helpless.

But for those of us who knew her and loved her, she was amazing. She was a powerhouse. She was a symbol to us that appearance were, most definitely, deceiving. Underneath that seemingly broken and fragile exterior, there was a strength and drive and purpose.

But we do know that none of those setbacks destroyed. They never stopped her. She plowed ahead with life. She loved and loved strongly. And she lived and lived strongly. She was amazing.

The image I have of her again and again is one of strength and steadfastness and independence.  For some reason, in these last few days, I think about many times when Harriet would grow impatient at church or when her ride was slow in coming, how she would head off for home from here. I think of her chugging along in her wheelchair toward home.

In many ways, that image represents so much of who Harriet was. Someone who set her attention on one thing and worked hard for that goal.  Yes, she was a person blessed in many ways, with strength and determination. And certainly God surrounded her with people who, in turn, loved her and looked out for her.
But ultimately today we, who knew her, are the true fortunate ones. We are the ones who were blessed to have known her. We are the ones who should thank our God for sending this person into our lives.

Harriet would listen and smile politely. But what I realized later was that she had every right to say to me, “Father Jamie, don’t complain. You don’t know how good you have it.” And of anyone I know, she had the full right to say such a thing to me.

Of course, she never did. But it’s very true. Harriet shows us that we do need to remember how good we truly have it. And for that alone I am grateful for having known her and claiming her as a friend.

I, like all of us here today, am going to miss her very much.  I knew Harriet for many years. And I certainly enjoyed greatly those years I knew her. I will miss her kindness, her gentleness, that smile of hers. And I will miss her strength.
Our scriptures today are all based on strength, if you notice. In our reading from Isaiah, we hear the Prophet say to us:

[God] gives power to the faint,
and strengthens the powerless…
but those who wait for the Lord shall renew their strength,
they shall mount up with wings like eagles,
they shall run and not be weary,
they shall walk and not faint

And in our reading from Paul’s Letter to the Thessalonians, we hear:

“For this slight momentary affliction is preparing us for an eternal weight of glory beyond all measure…”
If we wonder where Harriet’s strength came from, it came from God. She would be the first to say that to us, this morning.  That magnet on her refrigerator that said “I find my strength is in God” is truly the best statement about Harriet’s source of strength.

I’ve thought a lot about her strength and about all she was to us in these last several months.  I hadn’t fully realized how much I will miss her until last Sunday.

The night before, I received a call from our mutual friend, Clotine Frear, saying that Harriet had passed. I rushed over to her apartment and anointed her and said the Payers at Death with her. The next morning, before Mass, as I was standing here in the church before anyone got here, I looked at where her 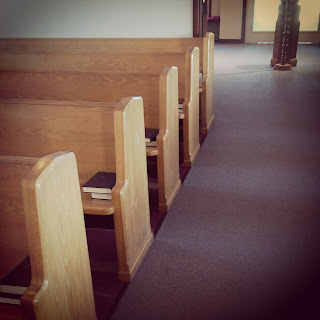 wheelchair always sat. I remembered all the countless mornings, when HandiWheels would arrive, when she would come up in the elevator, when she would sit there. Although she hadn’t been in church for several months, I suddenly felt her absence then. I realized that after over 50 years of regular attendance at St. Stephen’s, she suddenly was not going to be here again with us, worshipping with us. At least, not here in in our physical presence. But, she does continue to worship with us. Or should I say, we continue to worship with her?

This Eucharist that we are about to celebrate is not some quaint Communion service. This Eucharist is a glimpse of the worship that goes on for all eternity in God’s nearer Presence.  For a moment, we join with those who are in that Presence, who are in that worship, for all eternity. Harriet is there, at this moment. While she may not be here as she was before, in her wheelchair, confined by her physical life, dependent on others for her well-being, she is with us in a completely different way. She is with us without the wheelchair, without the physical limitations that controlled her life for so long. She is, in this moment, whole and complete.  She has, in the words of the prophet Isaiah,

The strength of Harriet Blow is real even in this moment.  Not even death has defeated Harriet Blow. All that joy, all that gentleness, all that wonderful life that was contained within that little small frame of a body—all of that is not gone today. It is not lost.

This morning, all the good things that Harriet Blow was to us—that woman of life and strength and joy—all of that is not lost. It is not gone.  Death has not swallowed that up.  Rather all of that is alive and dwells now in a place of beauty and Light inaccessible. She dwells there now in a place of peace and joy. And for that, let us be thankful for this woman whom God has been gracious to let us know and to love.

Into paradise may the angels lead you, Harriet.
At your coming may the martyrs receive you, and bring you into the holy city Jerusalem. Amen.