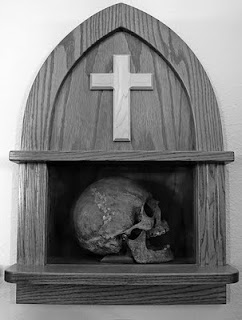 + This past week I went out to look at the flooding waters south of Fargo. I guess the flooding waters up here on the north side and out around my mother’s house weren’t enough for me. While doing so, I stopped at a beautiful church in a little town just south of Fargo called St. Benedict’s. St. Benedict’s is one of those beautiful, somewhat traditional, French churches. As I looked about the church, something off to the side caught my eye and I found myself doing a very dramatic double-take. There, on one wall, near a side altar, was a small glass-covered niche. Inside the niche was a human skull. A REAL human skull. It was the skull of one of the former priests of the parish, who died in December 1891. And there he is.

Now, I was inspired. I have revised my Will and I too would like my skull put in a glass niche right here in the wall at St. Stephen’s so you can always remember me and have me around.

The first, of course, is Ezekiel’s vision of the dry bones. The second is the raising of Lazarus. Both are filled with images of the dead being raised. The story that probably speaks most deeply to us is the story of Lazarus. And this story takes on much deeper meaning when we examine it closely and place it within the context of its time. One of our first clues that the something is different in this story is that, when Jesus arrives at the tomb of his friend Lazarus, he is told that Lazarus has been dead four days.

This clue of “four days” is important. First of all, from simply a practical point, we can all imagine what condition Lazarus’s body would be in after four days. This body would not have been embalmed like we understand embalming today in the United States. There was no refrigeration, no sealed metal caskets, no reconstructive cosmetics for the body of Lazarus. In the heat of that country, his body would, by the fourth day, be well into the beginning stages of decomposition. There would be some major physical destruction occurring.

Second, according to Jewish understanding, when the soul left the body, a connection would still be maintained with that body for a period of three days.

Bar Kappara, a rabbi of the late second and early third century, wrote: "Until three days the soul keeps on returning to the grave, thinking that it will go back; but when it sees that the facial features have become disfigured [by decomposition], it departs and abandons it.”

In a Jewish document on mourning called the Semahot we find the following: “One may go out to the cemetery for three days to inspect the dead for a sign of life, without fear that this smacks of heathen practice. For it happened that a man was inspected after three days, and he went on to live twenty-five years; still another went on to have five children and died later.”

So, what we find here is that, according to Jewish thinking of this time, the belief was the soul might be reunited with the body up to three days, but after that, because the body would not be recognizable because of decomposition, any reuniting would be impossible. After those three days, the final separation from the body by the soul would have been complete. The soul would truly be gone. The body would truly be dead.

So, when Jesus came upon the tomb of Lazarus and tells them to roll the stone away, Martha says to him that there will be stench. He was truly dead—dead physically and dead from the perspective of his soul being truly separated from his body. So, when the tomb was opened for Jesus, he would be encountering what most of us would think was impossible. Jesus not only reunited Lazarus’ spirit with his body, he also healed the physical destruction done to Lazarus’s body by decomposition. It would have been truly amazing. And Jesus would truly have been proven to be more than just a magician, playing tricks on the people. He wasn’t simply awakening someone who appeared to be dead, someone who might have actually been in a deep coma. There was no doubt that Lazarus was truly dead and now, he was, once again alive.

Now, at first glance, both our Old Testament and Gospel readings seem, like that skull in St. Benedict’s Church, a bit morbid. These are things we don’t want to think about. But the fact is, we are rapidly heading toward Holy Week. Next week at this time, we will be celebrating the triumphant entry of Jesus into Jerusalem. We will be hearing the joyful cries of the crowd as he rides forth. Within 11 days from now, we will hear those cries of joy turn into cries of jeering and accusation. And, within no time, we will be hearing cries of despair and mourning. We, as Christians who follow Jesus, will be hearing about betrayal, torture, murder and death as Jesus journeys away from us into the cold dark shadow of death. These images of death we encounter in today’s reading simply help nudge us in the direction of the events toward that which we are racing.

During Holy Week, we too will be faced with images we might find disturbing. Jesus will be betrayed and abandoned by his friends and loved ones. He will be tortured, mocked and whipped. He will be forced to carry the very instrument of his death to the place of his execution. And there he will be murdered in a very gruesome way. Following that death, he will be buried in a tomb, much the same way his friend Lazarus was. But unlike Lazarus, what happens to Jesus will take place within the three days belief at that time required for a soul to make a final break from his body.

In seminary, I had a professor who made very clear to us that Lazarus was not resurrected. The term he used to describe what happened to Lazarus was “resuscitation.” Lazarus was resuscitated. His soul was reunited with his healed body. But the fact was that Lazarus would eventually die again.

It is believed that, following the death of Jesus, Lazarus went to Cyprus, where he became a Bishop. In fact, one can visit two tombs of Lazarus. One can visit the empty tomb of Lazarus at Bethany, in modern Israel. And one can also visit his actual tomb in Cyprus in the Greek Orthodox Church of Agios Lazaros. There, under the altar, is the tomb which is inscribed, simply,

The tomb was actually opened in 1972 and human remains from the time of Christ were found buried there.

So, Lazarus truly did rise from the tomb in Bethany, but he was not resurrected there. He went on to live a life somewhat similar to the life he lived before. And eventually, he died again.

Yes, we will die. Yes, we will go down into the grave, into that place of bones and ashes. But, the resurrection of Jesus casts new light on the deaths we must die. The resurrection of Jesus shows us that we will rise from the destruction of our bodies—and our lives—into a life like the life of the resurrected Jesus. We will be raised into a life that never ends, a life in which “sorrow and pain are no more, neither sighing, but life eternal,” as we celebrate in the Burial Office of the Book of Common Prayer.

Because Jesus died and then trampled death, he took away eternal death. Our bodies may die, but we will rise again with him into a new and awesome life.

So, as we move through these last days of Lent toward that long, painful week of Holy Week, we go forward knowing full well what await us on the other side of the Cross of Good Friday. We go forward knowing that the glorious dawn of Easter awaits us. And with it, the glory of resurrection and life everlasting awaits us as well.

So, let go forward. Let us move toward Holy Week, rejoicing with the crowd. And as the days darken and we grow weary with Jesus, let us keep focused on the Easter light that is just about to dawn on all of us.
Posted by Jamie Parsley+ at 5:10 AM