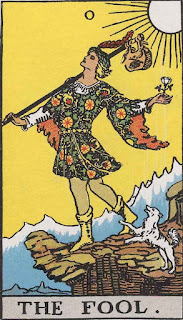 + I don’t think I’ve ever discussed this in a sermon before, but there is a very old and very strange tradition in the Russian Orthodox Church that has both fascinated and perplexed me. Many years ago I read a wonderful book on the subject, which I now no longer have and could not find in any online searches. But the idea of that book has lingered with me. The tradition is that of the so-called “Holy Fool.”

Now, I’m going to quote extensively here from Wikipedia, for which I apologize.  I don’t like quoting from Wikipedia if I don’t have to. But this is a pretty good summary of what Holy Fools were.

Foolishness for Christ refers to behavior such as … deliberate flouting society's conventions to serve a religious purpose–particularly of Christianity. Such individuals were known as both "holy fools" and "blessed fools". The term "fool" connotes what is perceived as feeblemindedness, and "blessed" or "holy" refers to innocence in the eyes of God.
The term fools for Christ derives from the writings of Saint Paul.
In the words of the Apostle Paul in 1 Corinthians 4:10, he famously says:
"We are fools for Christ's sake, but ye are wise in Christ; we are weak, but ye are strong; ye are honourable, but we are despised." (KJV).
Fools for Christ often employ shocking and unconventional behavior to challenge accepted norms, deliver prophecies, or to mask their piety.

A Holy Fool is one who acts intentionally foolish in the eyes of [all]. 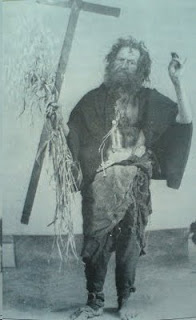 The term implies behaviour "which is caused neither by mistake nor by feeble-mindedness, but is deliberate, irritating, even provocative."

The "holy fool" is a term for a person who "feigns insanity, pretends to be silly, or who provokes shock or outrage by his deliberate unruliness."  Such conduct qualifies as holy foolery only if the audience believes that the individual is sane, moral, and pious. The Eastern Orthodox Church holds that holy fools voluntarily take up the guise of insanity in order to conceal their perfection from the world, and thus avoid praise.
Some characteristics that were commonly seen in holy fools were going around half-naked, being homeless, speaking in riddles, being believed to be clairvoyant and a prophet, and occasionally being disruptive and challenging to the point of seeming immoral (though always to make a point).

In other words, the Holy Fool is one who challenges, who disrupts one’s previously held views. It’s a topsy-turvy ministry. It is a ministry that, in a very shocking way, jars one out of their complacency.

The Holy Fools challenge again and again everything we thought we knew about our faith.  They challenge us on an intellectual and social level. And they challenge all out preconceived notions of what it means to be a Christian.

I’ve always loved the tradition of the Holy Fool. Because they remind us that Jesus is not calling any of us to perfection.

There are so many Christians who strive for some kind of weird perfection in Christianity. We must do this or do that so that we may be “right.” There are people who feel: I figured this out. I have read all the right books and taken all the right classes and I know now what it all means.

The Holy Fools challenge all of that. For them, our job as Christians is not to be perfect Christians or even “successful” Christians. And let me tell you, nowhere does the “intellectual snob” fit into Jesus’ vision of the Kingdom! Our job as followers of Jesus is to follow—to follow in our imperfection, as fractured, imperfect human beings. Not the best, but the least.

Now, I know that even hearing that creates frustration in many of us.  We like the idea of working toward the goal of perfection. And often we maybe even feel we have gained a kind of “success” as a Christian. We’ve got it figured out.  And I’ve heard people say it, even. I’ve heard people say to me, “Well, that’s not a very Christian thing to do, Father.” I’ve done it too.  I’ve said that.

So, the Holy Fools, in the face of that exalted view, challenge us, and frustrate us. But, the fact is, nowhere does Jesus expect us to be successful in our faith, or perfect.

Now, today’s Gospel, at first glance you would think would not be a reminder to us of this fact. But…but…it actually is. Deep down inside this Gospel reading, we find exactly what those Holy Fools were getting at in their bizarre and eccentric ministry.

If you notice at the beginning of our Gospel reading, as Jesus sits in the boat from which he preaches sort of like from a pulpit, we are told that there is a large crowd coming forward to listen to him.  To this large crowd, Jesus then proceeds to preach about seed that fails and seed that flourishes.  And for this moment, it seems as though the seed of the Gospel as it comes from Jesus’ mouth is truly falling on the good soil.

But…. when we look at it from the wider perspective of the story of Jesus, what we realize is that what he is preaching is, in fact, falling on rocky ground and among thorns.

Let’s face it: on the surface, from a completely objective viewpoint, Jesus’ ministry is ultimately a failure (or seems to be anyway).  Let’s look very hard at just this instant in Jesus’ ministry.

On this particular day, he is surrounded by twelve men—people he himself chose—who just, let’s face it, just don’t get what he’s saying.  And they won’t for a very long time. In fact, they won’t get it until after he’s dead.  These men will, eventually, turn away from him and abandon him when he needed them the most.  One of them, will betray him in a particularly cruel way: one of them will betray him to people he knows will murder Jesus.

By the time Jesus is nailed to the cross, it’s as though everything Jesus said or did up to that point had been for nothing.  Not one of the people Jesus helped, not one of the people he gave sight to, helped to walk, healed of illness, came forward to defend him.  Not even one person he raised from the dead came forward to help him in his time of need. And certainly, not one person from this large crowd of people that we encounter in today’s Gospel, comes forth to defend him, to vouch for him or even to comfort him as he is tortured and murdered.

Everyone left him except his mother and a few of his female friends.  And maybe his dear apostle John.

And if this was the end of the story, if it ended there, on that cross, on that Friday afternoon, then it would be truly one of the greatest failures.

But this is one of the cunning, remarkable things about Christianity—one of the things that has baffled people for thousands of years.  And this is what the Holy Fools embody in their lives and ministries.

Somehow, in a moment of abject loneliness, of excruciating physical pain, of an agonizing murder upon a cross, God somehow brings forth hope and joy and life unending.  And what seems to be sown on rocky ground and among thorns does, in fact, flourish and produces a crop that we are still reaping this morning. God truly can use our flawed and fractured selves for good and turn our failures and our frustrations into something meaningful.

What we can take away from our Gospel reading today is that our job is not always to worry about where or how we are sowing the seed.  Our job is to simply do the sowing.  And God will produce the crop. It is not our job to produce the crop.

What I have realized in my years of ordained ministry is that I simply need to let God do what God is going to do.  Our job, as Christians, is simply to sow.  And God will bring forth the yield.  And when God does, then we will find crops flourishing even in rocky soil and amidst thorns.

So, all you who have ears, listen. We will all feel moments of frustration in this life, but for those of us who hope in God and who sow the seed of God’s Word in this world simply cannot allow frustration to triumph.  Frustration and despair are the thorns and rocky soil of our lives. 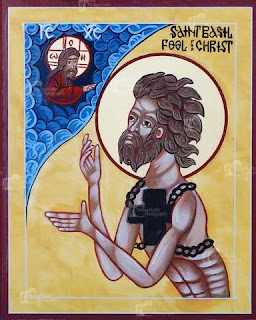 God loves us our weirdness, our eccentricity. God loves us when we are the misfits, the fools.  God uses and works through our imperfections.  And in our weirdness, in our imperfection, we become the rich soil in which that seed flourishes.  When we do that, the crops God brings forth in us and through us will truly be one hundred times more than whatever we sowed.  Amen.