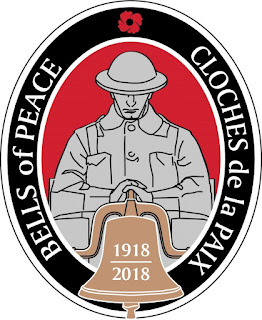 At our Wednesday night Mass, in which we usually commemorate a different saint each week, sometimes our commemorations take the form of a little history lesson. I often say: “we’re gonna take a little trip back in time.” And then, we go and visit some distant year.

Well, today, we’re going to do that as well. We are going to go back in time. Actually we’re going back 100 hundred years exactly. Back to Monday, November 11, 1918.

If we actually went back to the day before, to that Sunday morning, November 10, 1918, well, we’d all be really cold right now because St. Stephen’s didn’t exist. In fact, this was a wide open field quite a ways out of Fargo in 1918.

Well, most of the churches in Fargo and Moorhead and, in fact, in most of the country, were under quarantine. The Spanish Flu was raging. And scores and scores of young people had been dying of the flu for at least a month and scores more would be dying in the next several months.

In the midst of that bleak and terrible world, on that Monday in France, the guns of war quieted finally and the “Great War,” as it was known, finally came to a close. But only after 2,700 people died that day before peace was declared. Henry Gunther was the last soldier to die in the war. He was shot 60 seconds before the Armistice while trying to charge the German lines to reclaim himself after being demoted.

And yes, it was raining in France 100 years ago today too.

It was an awful war. It was a bloody, quagmire of a war. And it was devastating on all those involved. And sadly, although it was to be supposed the war that ended all wars, it was not. Not by any means.  Nor was it really a “Great” War either.

It’s important for us to remember this war and those who died. Because it was important.

Now, as unpleasant as it is for us to revisit 1918 today, there was another historical event this week that I think we would resist returning to even more than 1918.  I am not going to ask you return with me to that event. We are not going back to the night of November 9-10, 1938. 80 years ago yesterday.  And, in comparing it to the events of 1918, it almost makes the Great War and the Spanish Flu pale in comparison.

80 years ago yesterday, was the anniversary of Kristallnacht, or the Night of the 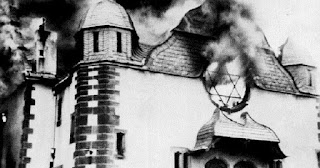 Broken Glass. And it was on that night, in Germany, that Jewish shops and houses and synagogues were burned, people were murdered, men were arrested and sent off to camps. It was the beginning of a nightmare that would culminate in Auschwitz and gas chambers and crematories and 6 million people dying simply because they were Jewish. That event is also very important for us to remember today. And always.

Because, as Christians, we need to work, in our own lives, to make sure that neither of these events—the Great War and Kristallnacht—happen again.

All of our scriptures this morning find their purest and most poignant voice in the words from today’s Psalm:

“The Lord raises up those who are bowed down.”

“Bowed down” is a beautifully poetic understanding of the sufferings that come to us when we are at war, or when we are ill, or when we are being persecuted and treated unfairly by others.  Certainly, in biblical times, no one was more bowed down than the widows we meet in our readings today.

In our Gospel, we find a widow who is giving two small coins—money that, no doubt, could have gone for food.

But there’s more to it than that.

Being a widow then and there was different than being a widow now.   We oftentimes miss the real meaning behind these stories of the poor widows. A widow in those times was very much a person “bowed down.” Women, for the most part, at that time were defined by their men. Men took care of women—whether it be the father, the husband, the brother or the son— and when there were no men to look after the woman, she was left to her own devices, which were—in that time and in that place—extremely limited.

So, when we look at it from this perspective, for these widows, to give anything at all, is pretty amazing, since they probably had very, very  little to give in the first place.  And yet they, in their poverty, gave abundantly.  These widows, these bowed down people, these marginalized and ignored people, are the people we are called—no, that we are commanded—to not forget about or turn away from.

The reason behind this is that we—as believers in God and followers of Jesus—are not to look at the world as those “of the world” do.

But more so than even that, oftentimes when we act as God acts in this world, we are actually being the embodiment of God to those who need God in their lives.  And most importantly, when we refuse to turn away from the oppressed in our midst, we are being mirrors of that compassion and love of God to others.

We too are not fully content, not fully rich, not fully whole. Even those of us who “have,” know what it means, at times, to be out in the fringes. We too who dress in our “long robes,” sometimes know what it means to be “bowed down” by injustice.  When we read these stories of the poor widows—we can, in all honesty, put ourselves in the place of the widow.

No, we are not necessarily hungry, or poor, or dependent upon someone else for our financial well-being. But we may have known oppression in our lives. We may have known what it feels like to be marginalized, to be treated as someone less in this world just because of who we are. We too know what it is like to be ignored and seen as unimportant.

And any of us who have been truly “bowed down” can tell you: being “bowed down” is awful. Truly and terribly awful! No one strives to be ones of the bowed down in our society. No one wishes to be treated that way in this world.

So, what do we do in these situations?  Well, when it happens we recognize our dependence on that One who truly does feed us who are hungry, on the One who raises up us who are bowed down

Because God is with those who are oppressed. God was with those people whose shops were being burned on Kristallnacht, God still dwelt in those temples that were vandalized and burned, God was with those women who had to pick up the pieces after their husbands and sons were sent to the camps, who had to clean up their homes, who had to hold it all together. The strength and the forbearance of those people shows us how truly present God was with them.  And in this world—this world that is at times so unfriendly and so mean-spirited and so violent and so full of illnesses that devastate us—we too know what it means to be on the receiving end of those things.

We too know what it means, at times, to be hurt and burdened. And it is very important for all of us who are bowed down to remember.

Those who are lacking are not only to receive justice. We cannot just hoard justice or demand it only for ourselves.   We are to show justice as well in our own lives.

And that it is why it is important to identify with the widows. We—fractured human beings that we are—must show the justice we expect for ourselves. Even in our lacking, even bowed down as we might be, even ostracized and marginalized from the world and the Church and society, we must live out our lives with integrity and meaning.

We must emanate justice in all we do and say.  We must strive for a truly lasting peace that will truly end all wars. And we must fight against injustice whenever we see.

So, let us bear within ourselves the love and compassion of God to others.

Let us reflect it with our very lives and actions.

Let us live God’s justice out in our very lives and in all of our actions.

Let us truly see this world through the eyes of God.

Let us love others, as God loves us.