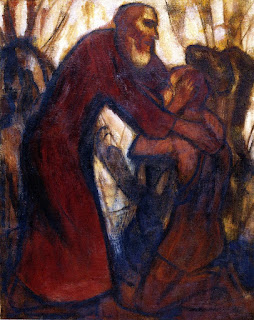 + As you may have heard, the writer and Episcopal priest Barbara Brown Taylor was at Concordia College last Tuesday. It’s one of the few times I have ever been star-struck—and I’ve met some fairly famous people in my life (at least famous by my personal pantheon of famous people).  I was even fortunate enough to be seated at the head table at a supper in her honor that evening, just one person over from her.

In fact, I even got to talk to her. And what did we discuss?

We discussed St. Stephen’s! Or more specifically what we do here.

At some point in the evening, I was talking to a student beside me, who was asking questions about the Episcopal Church. When she asked what I loved most about being Episcopalian, I said it was our theology about the Eucharist.

Barbara Brown Taylor, who was talking to someone else, turned and said, “I heard the word ‘Eucharist.’”

I then explained to her our views on the Eucharist here, about our open invitation 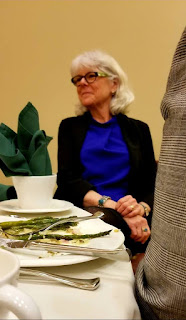 of all people present here are welcome to Holy Communion, not just the baptized (which is very controversial, I know, even among some of you) She smiled and we had the discussion I often have about the Last Supper and my view that we do not know who was baptized and who wasn’t at the Last Supper (actually we know only One who was at that meal).

I then said that somehow the Eucharist has become this privileged meal for only those who are “in”—which is exactly what we can imagine Jesus would not want it to be—an exclusive little private meal for the privileged.

At some point the conversation turned to St. Stephen’s being the only congregation in the Diocese to be allowed to same-sex marriage, and our DEPO process. She was particularly impressed with this.

I explained that, as of May 1, the thing we fought so hard to do here at St. Stephen’s will now be the norm in the Diocese of North Dakota.

She said, “You guys are trailblazers.”

The conversation turned briefly to religious communities on the edge. At that point, she was asked to give a question and answer period so we never finished our conversation.

But during her talk later that evening, Barbara Brown Taylor talked about religious communities on the edge. And it gave me a bit of pride knowing that she knew of an Episcopal church in Fargo, North Dakota that was one of those communities.

We are one of those communities. We have been out on the edge in our ministries throughout our entire history.  And, I can say this, being out here on the edge is important, but it isn’t always fun.

There’s a downside to being rebellious. It can be very isolating. Oftentimes, the rebel is all alone in the cause of rebellion. There are days when it feels like one is Don Quixote fighting windmills.  And it’s exhausting.

To stand up for what it right, to often be at odds with those in authority, to finally have make a decision to step back and not cow tail to authorities who do not respect you or respect the worth and dignity of other human beings or respect the stand you’ve made, is very hard. And now that we are pondering the end of DEPO and our own reconciliation with the Diocese of North Dakota, we are also facing a difficult moment.

How to do so when there has been so much pain and so much hurt between us? Because we do have to acknowledge the fact that, we made the right stand. The proof is in the pudding.

What we stood up for in 2015 is now the norm in the Diocese and the rest of the Episcopal Church. For the naysayers in 2015, I hate to say this, but—I told you so. I told you this was exactly what was going to happen.  What we stood up for then is now the norm.  And we needed to make that stand then.  We needed to be that force in 2015. We needed to stand up and be a safe place in a diocese that did not feel safe for many of us.

Yes, when that decision not to allow same-sex marriage rites in this diocese when the rest of the Church did, it did not feel like a safe place in this Diocese for many of us.  And for the people who have been married through St. Stephen’s, who have been affirmed by our stand, it was totally and completely worth it!

But…and I am going to emphatic on this: for reconciliation to happen in this diocese, we have to realize that it is going to be a two-way reconciliation. It is not time for us to come groveling back.

We did nothing wrong in our stand and in what was said and done in 2015. I want to be clear: we are NOT the Prodigal Sons returning home in this. And I want that to be very clear about that as we proceed forward in this diocese.

But, although we are not the Prodigal Son, we can definitely find ourselves relating to the story Jesus tells this morning in our Gospel reading.  We have all been down that road of rebellion and found that, sometimes, it is a lonely road, as I said. Sometimes we do find ourselves lying there, hungry and lonely and thinking about what might have been.

But for me, in those lonely moments, I have tried to keep my eye on the goal.  I am, after all, one of those people who habitually makes goals for myself.   I always need to set something before me to work toward.  Otherwise I feel aimless.  Goals are good things, after all.

In our Gospel for today, we find the Prodigal Son have some big goals and some pretty major hopes and dreams.  First and foremost, he wants what a lot of us in our society want and dream about: money. He also seems a bit bored by his life. He is biting at the bit to get out and see the world—a feeling many of us who grew up in North Dakota felt at times in our lives. He wants the exact opposite of what he has. The grass is always greener on the other side, he no doubt thinks. And that’s a difficult place to be.  He only realizes after he has shucked all of that and has felt real hunger and real loneliness what the ultimate price of that loss is.

But every time we recognize our loneliness and we turn around and find God again, we are welcomed back with open arms, and complete and total love.  That, of course, is what most of us get from this parable.

There’s another aspect to the story of the prodigal son that is not mentioned in the parable.  The prodigal has experienced much in his journey away.  And as he turns back and returns to his father’s house, we know one thing: that prodigal son is not the same son he was when we left.  The life he has returned to is not the same exact life he left.  He has returned to his father truly humbled, truly contrite, truly turned around.  Truly broken.

And that’s the story for us as well.  In my life I have had to learn to accept that person I have become—that people humbled and broken by all that life and people and the Church have thrown at me.  And I have come to appreciate and respect this changed person I’ve become.

That’s the really hard thing to do.  Accepting the change in myself is so very difficult.

God at no point expects us to say the same throughout our lives.  Our faith in God should never be the same either.  In that spiritual wandering we do sometimes, we can always return to what we knew, but we know that we always come back a little different, a little more mature, a little more grown-up.  No matter how old we are.  We know that in returning, changed as we might been by life and all that life throws at us, we are always welcomed with open arms by our loving God.  We know that we are welcomed by our God with complete and total love.

And we know that, lost as we might be sometimes, we will always be found.  And in that finding, we are not the only ones rejoicing.  God too is rejoicing in our being found.

That is the really great aspect of this parable.

God rejoices in us.

God rejoices in embracing us and drawing us close.

So, let us this day rejoice in who we are, even if we might not fully recognize who we are.

Let us rejoice in our rebelliousness and in our turning back to what we rebelled against.

Let us rejoice in the fact that we are a voice and force of change as a congregation.

Let us rejoice especially in the fact that no matter how lonely we might be in our wanderings, in the end, we are always, without fail, embraced with an embrace that will never end.

And let us rejoice in our God who rejoices in us.