The Funeral for Florence Hagensen 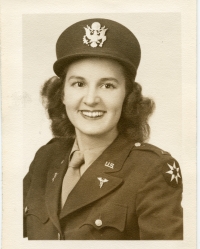 + As some of you might know, I am Florence’s great-nephew. My grandfather, John, was her brother. So, Florence, for me, was one of those presences that always seemed to be there in my life.


I always remember Florence as a hard worker, a loyal wife and mother, a very strong and determined presence in my life and the life of all of us in the family. And no doubt most of us who knew her remember her in just that way.

When I met with Florence this past March to plan this service, she gave me a bit of a glimpse into the secret of that strength and determination that really defined who she was. What a lot of people don’t know about Florence is that, as child, she grew up in great poverty. She talked last March of the little bit of food she and her nine other brothers and sisters had to live off, the very basic clothes they wore and how difficult it was, in those circumstances, to gain any respect from others. I can’t even imagine what that life must’ve been like—but let me tell you, from what she shared, it was tough. It was hard.

But Florence in her life, rose above those obstacles. She flourished and she made a name for herself and for her family, despite the sometimes overwhelming odds. I will remember that about her clearly. And I will tell you, I was inspired by her ability to do so.

But I also remember and was inspired by her deep and abiding faith. Florence, as everyone here no doubt knows, was a devout Catholic throughout her life. And her faith was important to her. She often shared with me how important her faith was. Her faith in God. Her following of Christ. The inspiration she drew from the Blessed Virgin Mary (which I also share) And her special devotion to St. Jude (a saint that has been very important to me as well).

Back then, I was a nominal Lutheran and I received a little bit of a backlash from some of my family about making that jump. But not from Florence. She was glad for me and supported me in that change. In fact, on that day that I was received into the Catholic Church, she stood up for me as my sponsor. And she also on that day gave me the crucifix that is now lying on her casket.

Although I eventually left the Catholic Church and became an Episcopalian and eventually an Episcopal priest, Florence was one of those Catholics who did not have a problem with my leaving the Catholic Church. In fact, she supported me in whatever I did throughout my life. For her, it was more important that I believed and that I heeded God’s calling, wherever God might be calling me.

Now, for her, she had her own issues with the organized Church. But her faith in Christ and her devotion to Our Lady never wavered. For her, faith was more than just a church building or a set of creeds and dogmas. Faith, for her, was what got you up in the morning, was what sustained you through the hard times and what helped explain why sometimes bad things happened to good people. Faith, for her, was knowing that no matter how bad things might seem to get, Christ will show you the way through and, in the end, you will be taken care of.

Certainly, we know that, for her, in the end, she was taken care of. Christ came for her last Friday night in peace and, in peace, she left to join him.

For me, she was very much an example of faith-in-action. Now, I really have to be careful what I say at this point. Because I know that if Florence were here this morning—and she is here with us—she would take issue with me about talking too much how all good things about her. She would not like me standing me up and calling her a saint, let me tell you. In fact, I can just imagine her waving her finger at me and telling me, “Ok, change the subject now.” But, that’s all right.

I can say this, though. She knew that God works in God’s own way in each of our lives. Sometimes in ways we might not fully understand. Today is truly an example of that. Today, this day we say our goodbyes to her, is the twentieth anniversary of the passing of her husband, Gerald. It’s hard to believe it’s been twenty years since Gerald left us. And it’s hard to believe that on this day, we are saying goodbye to Florence.

But for us, goodbyes are not times for despair. For those of us who, like Florence, call ourselves Christians, who follow the way of Jesus in our lives, this is not a time to feel hopeless. It is a time to be sad, yes, because she is not with us. But it is not a time to feel hopeless. Because we know where Florence is this morning, and we know that we too will be there with her one day. That is why we are not hopeless today. For those of us who have known the prayers of St. Jude, we know there is no such thing as a hopeless moment.

In a few moments, I will pray what is called the Commendation at her casket. It is that point in which we commend Florence to Christ’s loving care. In the Commendation you will hear me say those wonderful words,

Yes, we will all die one day. Florence knew that and she had no fear of that fact. But the real sign of spiritual strength that I know she would want to pass onto to us is the fact that not everybody, at the grave, can make a joyful sound like “Alleluia.”

Florence could. And we can as well today.

So, as we say goodbye to this strong, wonderful woman, we do so with tears in our eyes, yes. We do so with sadness in our hearts that she is not here with as she was before. Yes. But we do so, as she would exepect us to do. We do so with that joyful “Alleluia” on our lips.

So, let us go from here today with that alleluia ringing in our ears and burning in our hearts. And let us know that the joy Florence is experiencing right now in that glorious place awaits each of us as well.