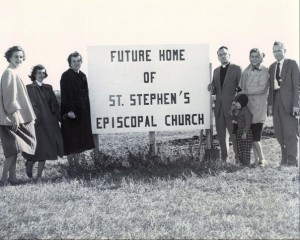 + One film I love watching again and again is the 1985 classic, Back to the Future. The story (for those you who might not know it) is about a young man, Marty McFly, played Michael J., Fox. In the film, he ends up driving a DeLorean, which has been modified by his scientist friend through nuclear fission and using plutonium (stolen from the Libyans) as fuel, which generates 1.21 giggawats of power into a device called a “flux capacitor.”

Well, this morning, we too are going back to the future. No, we do not have a flux capacitor. We’re just going to use out imaginations, this morning.

We’re going to take a little trip back in time… No, were not going back to those awful events ten years ago on that awful date in 2001.

We’re going back to a bit more stable time—a more innocent time. Our trip is taking us back 55 years. It is Sunday morning, September 9, 1956. On this particular Sunday in 1956, it was truly a different American.

The number one song in the country that Sunday morning was “Don’t Be Cruel” by Elvis Presley. In fact, that very night Elvis would appear on the Ed Sullivan Show—“coast to coast with your favorite host.”

The number one book in the country that morning was Peyton Place by Grace Metalious.

1956 was an election year. The current president, Dwight D. Eisenhower, would be going up against the Democratic hopeful, Adlai Stevenson, who would lose that November.

But on this morning, the congregation of St. Stephen’s was officially dedicated. According to the records, there were 51 people at that service. It we think hard enough, we can almost imagine how people looked in church that morning. The women in hats and skirt, the men in suits and ties. 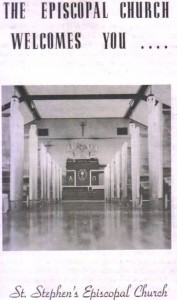 And no doubt it felt like something was truly beginning. By the end of that year, there would be 51 communicates (39 of whom came from the Cathedral) and a total of 94 baptized members listed. By 1958, there were 144 baptized members and 45 families and by Jan. 1, 1960, there were a whopping 214 members with 60 families.

Over the years, those numbers just kept going up. Within ten years, in 1968, the membership received its number of 243 members.

Now, the story of St. Stephen’s is fascinating. In its 55 years, there have been ebbs and there have been flows. And throughout those 55 years this seemingly small congregation has been the first do many wonderful things.

The first woman Senior Warden in the Diocese.

The first woman priest to serve a congregation in the diocese.

The first congregation in the diocese to openly and unabashedly welcome gay, lesbian, bisexual and transgendered people.

The first to establish a chapter of the Episcopal Peace Fellowship.

The first, just ten years ago, to have a labyrinth.

Of course, there were hard time too. I have heard with great sadness the stories of what is called the “Exodus out” in the 1980s. It is sad to look through the parish records and see those numbers drop and dribble away for various reason throughout the 1980s.

But, here are, back in our own day. Here we are on this glorious morning in September 0f 2011. Here we are, 55 years into our ministry to the Church and the world. And we have a lot of celebrate this morning.

If you’re anything like me, when things seem to be going well, there is a sense of disbelief. I often wonder: is this really happening? And then I do an awful thing. I started taking it for granted.

And I’ve had to catch myself a few times over these last few years so I do not fall into the trap of taking for granted what God has given us here at St. Stephen’s.

Just three years ago, our membership was 55 members, which had remained pretty steady for about ten years previously.

But this year, we can rejoice in the fact that, for the first time since 1984, our membership is now in the triple numbers. Our Average Sunday Attendance is only going up and remaining steady. I think we have only dipped below 30 people once or twice on Sunday this whole past summer (which is quite the feat for us).

Now, I know some people have an issue with my so-called “cheerleading: of St. Stephen’s. Yes, I have actually been scolded by people outside out congregation for bragging too much about St. Stephen’s.

In our wonderful reading this morning from St. Peter, we find him saying,

When we look around us this morning, as we celebrate 55 years of ebb and flow in our congregation, we realize that truly we are on the receiving end of a good amount of mercy. We realize that mercy from God has descended upon us in this moment. And it is a glorious thing.

And, as unbelievable as it might seem at times, we cannot take it for granted. We must use this opportunity we have been given. We realize that it is not enough o receive mercy. We must, in turn, give mercy.

Mercy, as we all know, is elusive. We can’t pin it down. But we know when it comes to us. And we know how to be merciful to others.

The way we properly and truly celebrate 55 years of St. Stephen’s ministry to the Church and the world is by giving thanks for the mercy wee have received and are receiving at this moment. And we turn around and share that mercy with others. That’s what we’ve been doing here at St. Stephen’s from that very beginning way back in 1956.

We, this morning, are being called to echo what St. Peter said to us in our reading this morning.

We, God’s own people, are being called to “proclaim
the mighty acts of [God] who called [us] out of
darkness into [that] marvelous light.”

We proclaim these mighty acts by our own acts. We proclaim God’s acts through mercy, through ministry, through service to others, through the worship we give here and the outreach we do from here.

I love being the cheerleader for St. Stephen’s. Because it’s so easy to do. God is doing wonderful things here through each of us. Each of us is the conduit through which God’s mercy and love is being manifested.

In our collect for this morning, we prayed to God that “all who seek you here [may] find you, and be filled with your joy and peace…”

So, let us continue to receive God’s mercy and, in turn, give God’s mercy to others. Let us be a place in which mercy dwells. Because when we do we will find ourselves, along with those who come to us, echoing the words of Jacob from our reading in the Hebrew Bible this morning,

“How awesome is this place! This is none
other than the house of God, and this is the gate of
heaven.”
Posted by Jamie Parsley+ at 5:09 AM