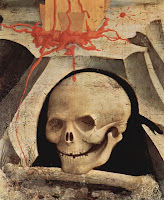 + Ah, Lent! Lent is one of those times—I can’t say it’s one of those RARE times—when you are going to see a more eccentric side of me. Actually what I should say is an additional eccentric side to me. It’s weird thing—a thing you will not hear from many clergy people—but I actually truly kind of like Lent. I like the kind of strange, counter-cultural things we do during Lent—like fasting. Fasting is wonderful! It really does put one in touch with one’s physical self.

And this whole business of just stopping and pondering such things as one’s own brokenness—as depressing as it might seem—is actually quite liberating as well. And humbling.

I have been re-reading Michael Ford’s biography of the great Christian writer, Henri Nouwen. Ford talked about how Nouwen, a Roman Catholic priest, had become the chaplain of Daybreak, a community of developmentally disabled people in Ontario. While there, Nouwen started a daily celebration of the Eucharist

That final sentence really resonated with me this past week as we entered this Lenten season. That concept of the broken ones of God having a connection with the broken body of Christ that we experience in a very physical way during our celebration of the Eucharist has spoken to me and it is this theme that I am going to return to again and again during this season. Being broken—and we all are broken in various ways—is just a reality for us. But it is not a time to despair. Our brokenness, especially when we place it alongside the broken Body of Christ that is lifted up and shown at the Eucharist, has more meaning than we can fully fathom at times. In that moment, we realize we can no longer feel separated from Christ by our brokenness. It is a moment in which we are, in fact, uniquely and wonderfully joined TO Christ in our shared brokenness. And what we glimpse today in our scripture readings is, on one hand brokenness, and on the other hand, wholeness.

The connection between Adam and Jesus is a long and interesting one. And it is one that has layers of meaning. I have always loved reading the traditions through the history of the Church in which connections are made between Adam and Jesus. For example, there is a tradition that believes that the tree from which Eve picked the fruit was later cut down and used as the wood for the cross on which Jesus died. There is also another tradition that I just read recently. There is a tradition that when Adam and Eve died, they were actually buried on Golgotha, the place where Jesus would eventually be crucified.

In Jerusalem, in the Church of the Holy Sepulcher, there is a large rock beneath the Calvary Chapel. This rock is split and a red streak runs right through it. It is believed that, when Jesus died on the cross, this rock split. And his blood trickled down into the crack in the rock to the place where Adam and Eve were buried. As the blood touched their bones, this tradition states, Adam and Eve were finally restored to their former state though Christ. They were saved. Their brokenness, in a sense, was restored through the broken body (and blood) of Christ. In fact, in some representations of the crucifixion, you can often see a skull at the base of the cross. The tradition is that this skull is actually the skull of Adam.

I love these traditional stories, not because I necessarily believe that they’re true. I love them because they help us to see that there are no loose ends in the story of God. Anytime we find something broken, somehow God fixes it in the end. When it comes to God, what seems like a failure—the fall of Adam and Eve—eventually becomes the greatest success of all—the refusal of Jesus to be tempted. And whatever is broken, is somehow always fixed and restored.

Still, we must deal with this issue of temptation. Iy is the hinge event in both of the stories we hear this morning from scripture. Alexander Schmemann, the great Eastern Orthodox theologian, once said that there are two roots to all sin—pride and the flesh. If we look at what Satan offers both Adam and Jesus in today’s readings, we see that all the temptations can find their root mostly in the sin of pride. Adam and Eve, as they partake of the fruit, have forgotten about God and have placed themselves first. The eating of that fruit is all about them. They have placed themselves before God in their own existence. And that’s what pride really is. It is the putting of ourselves before God. It is the misguided belief that everything is all about us. The world revolves around us. The universe exists to serve us. And the only humility we have is a false one. When one allows one’s self to think along those lines, the fall that comes after it is a painful one.

When Adam and Eve eat of the forbidden fruit, they are ashamed because they realize they are naked. They realize they have nothing. They realize that, by themselves and of themselves, they are nothing. This realization is that it is not all about them, after all. They have failed themselves and they have failed God in their pride. But the amazing thing, if you notice, is that Adam and Eve still have not really learned their lesson. They leave the Garden in shame, but there is still a certain level of pride there. As they go, we don’t hear them wailing before God. We don’t see them turning to God in sorrow for what they have done. We don’t see them presenting themselves before God, broken and humbled, by what they have done. They never ask God for forgiveness. Instead, they leave in shame, but they leave to continue on in their pride.

From this story, we see that Satan knows perfectly how to appeal to humans. The doorway for Satan to enter into one’s life is through pride. Of course, in scripture, we find that Satan’s downfall came through pride as well. Lucifer wanted to be like God. And when he knew he couldn’t, he rebelled and fell. We see him trying to use pride again in his temptation of Jesus in the wilderness. When Satan tempts Jesus in the wilderness, he tries to appeal to Jesus’ pride. He knows that Jesus knows he is exactly who is. Satan knows that Jesus truly does have the power to reign and rule, that he has all the power in the world. And Satan further knows that if he could harness that power for himself—for evil—then he will have that power as well. Because Jesus was fully human, Satan knew that he could appeal to the pride all humans carry with them. But Jesus, because he, in addition to being fully human, was also fully God as well, refused to succumb to the sin of pride. In fact, because Jesus, fully God, came to us and became human like us, the ultimate sign of humility came among us.

So, these two stories speak in many ways to us, who are struggling in our own lives. As we hear these stories, we no doubt find ourselves relating fully to Adam and Eve. After all, like Adam and Eve, we find ourselves constantly tempted and constantly failing as they did. And also like them, we find that when we fail, when we fall, we oftentimes don’t turn again to God, asking God’s forgiveness in our lives. We almost never are able to be, like Jesus, able to resist the temptations of pride and sin, especially when we are in a vulnerable state.

Jesus, after forty days of fasting, was certainly in a vulnerable place to be tempted. As we all enter the forty days of fasting in this season of Lent, we too need to be on guard. We too need to keep our eyes on Jesus—who, in addition to being our God, is also our companion in this earthly adventure we are having. We need to look to Jesus, the new Adam, the one who shows us that Adam’s fall—Adam’s brokenness—and Adam’s fall and brokenness is essentially our fall and brokenness as well—is not the end of the story.

So, let us follow Jesus in the path of our lives, allowing him to lead us back to the Garden of Eden that Adam and Eve were forced to abandoned. Because it is only when we have abandoned pride in our lives—when we have shed concern for ourselves, when we have denied ourselves and disciplined ourselves to the point in which we realize it is not all about us at all—only then will we discover that the temptations that come to us will have no effect on us. Humility, which we should be cultivating and practicing during this season of Lent, should be what we are cultivating and practicing all the time in our lives. Humility is the best safeguard against temptation. Humility is the remedy to help us back on the road to piecing ourselves back together from our shattered brokenness.

So, as we move through the wasteland of Lent and throughout the rest of our lives, let us be firm and faithful in keeping Jesus as the goal of our life. Let us not let those temptations of pride rule out in our life. In these days of Lent, let us practice personal humility and spiritual fasting. Let Jesus set the standard in our lives. And let him, as he did to Adam and Eve when he died on the cross, raise us up from the places we have fallen in your journey. And let us let him piece our brokenness back into a glorious wholeness.
Posted by Jamie Parsley+ at 5:55 AM