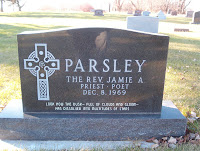 “In heaven, it is alwaies Autumne,” John Donne preached in London’s St. Paul’s Cathedral on the evening of December 25, 1624. If so, I came to realize, then in hell it is always winter. Coming as I do from North Dakota, I know a few things about winter. Although there is, if one looks long and hard, a special kind of winter beauty, for the most part I have always found winter in North Dakota to be a season of little beauty—a land frozen and barren.

In the autumn of 2002—the autumn of my cancer year—the earth seemed to close up once again. The trees shed their leaves. Frost covered the ground in the mornings and slowly the temperatures dropped bit by bit as the days went by. As winter began to descend upon the land, I did something that few people my age ever do.

I bought my own gravestone.

Actually, the stone itself had already been bought. My parents purchased their stone—a graceful cut of standing black granite—about four years before and had it set up in the beautiful tree-rimmed cemetery behind their church, Maple Sheyenne Lutheran, set into the flat, black-soiled fields near Harwood, North Dakota. Their names and birth dates were engraved on the front of the stone, along with Brancusi’s “Symbol of Joyce” (although made for James Joyce, my mother, whose name is Joyce, claimed it for herself) and a Native American arrowhead (my father’s hobby). The back of the stone, however, was bare. Only a pale vein of lighter colored granite swam through the dark bare panel.

One bitterly cold Sunday shortly after my diagnosis, I drove out to the cemetery and trudged through the snow to take took a good long look at the stone and the ground around it. It was strange how cancer put it all in perspective—death and dying, burial and cemeteries. Something lethal, after all, had come upon me like a dark shadow. No longer was death something to worry about later, when I was older. It had drawn close—too close for comfort. As it did, the possibility of it taking me sooner than later loomed before me. To say that a realization of this sort was sobering was an understatement.

The thought of my disposition was certainly something I had considered before. Any clergy person who has buried or helped bury parishioners and loved ones certainly entertains thoughts of their own funeral and burial at some point in their career. If my funereal experiences taught me anything, it was that for some reason, cremation somehow made the process easier to bear, at least from my perspective. Open caskets, with the deceased laid out, powdered and embalmed, within bronze Cadillac-like caskets seemed a bit much for my personal tastes. It all seemed unreal in some way, as though it were all a pretense to deceive us into believing that death wasn’t quite what it really was. The over-all feeling of the modern American funeral seemed to perpetuate a false reality that death was an extension of our living. Comfortable in life, we (or our loved ones) should be as comfortable in death, put away inside watertight caskets with plush, cushioned interiors, set into a spectacular reinforced steel vault in the ground.

I was drawn instead to how concise and disposable everything became following cremation—the dry gravel of cremated remains; the small, box-shaped urn, covered by a white pall; the neatly dug hole in the cemetery. The cleanliness and orderliness of it all seemed, quite simply, right.
However, for reasons I could never adequately articulate, the thought of having my ashes scattered never appealed to me. During the one instance in which I had participated in the scattering of someone’s ashes, I found the process more troubling for the family than comforting. There was a cold finality as the last whiffs of a dust that had once been their mother drifted off and settled on the surface of a muddy creek bed. Months later one of the daughters came to me and expressed her regret that they didn’t keep at least some of the ashes to bury. “I realize now,” she said, “that I need a place.”

As I stood in Maple Sheyenne Cemetery near Harwood, North Dakota that cold March afternoon, I realized I needed a place as well. And this was it. This was the place of my roots. The little Lutheran church was the first place I came to know God as a child and it was in this cemetery in my teens that I first realized that death wasn’t necessarily a bad thing—but rather a natural part of one’s life. If there was ever a place my ashes belonged, it was here. As I brushed the snow away from the frozen ground at base of the stone, I felt as though this was one of the surest decisions I had ever made in my life.

After all, it seemed appropriate that, since I was called to be a priest in a cemetery, my mortal remains would end up in one. Cemeteries are, after all, symbols, if nothing else, of the Resurrection. In my part of the U.S.—North Dakota—most cemeteries are ringed with evergreens. There, in the middle of treeless stretches of wheat fields, islands of evergreens seems to rise here and there. The choice of evergreens was more than just aesthetic. The evergreen was a symbol of everlasting life in the midst of death.

After making my decision, the process of planning my final disposition was fairly simple. Having the stone inscribed was easy. The husband of my good friend, Ann, owned the monument company in town. In fact his family had owned the company for over a hundred years. But before I could even go to him, I first had to decide what I wanted inscribed.
The given, of course, was that I wanted to be identified as:

I began there, writing it out on a piece of paper. Next I needed a symbol similar to the ones my parents chose for themselves. I realized the only symbol I could use—the only symbol that made any sense to me in my life at that time and throughout my spiritual journey so far—was the cross. I needed a cross for my stone. But not just any cross. At first, I thought of a bronze one that could be attached to the face of the stone. But as I thought about it even longer and as I searched the Internet for crosses, I finally came upon a beautiful Celtic cross, the Greek letters for the Holy Name—I H S—set in its crook, jumped out at me. A similar cross hung for years above my bed and to have this particular cross at the head of my grave only seemed appropriate after sleeping under it for so long during my life. Only later, some time after the stone had been set into place, did I realize how unique it was to see that Celtic cross and that very English name—PARSLEY—among all those Swedish surnames in that Lutheran cemetery.

The epitaph was a harder choice. I always believed that a poet should, after all, have an epitaph for oneself in mind. I didn’t, however, and this was my dead-end. What kind of epitaph would, in a few carefully chosen words, sum up in some way my life? Throughout the year—through that spring and summer of recovery—the epitaph evaded me. Then, in the fall it came to me as gently as the first falling snow. While on a trip I took to Minot, North Dakota a few weeks before, I wrote a poem on my way there— “Dusk.” In the midst of that poem, the epitaph appeared quietly but surely. There, at the very end of the poem, was the perfect summation not only of who I was, but of what I hoped in and for. The stanza truly summed up the strange, nagging hope that has always obsessed and marked me in one way or the other for the better part of my life.

Look how the dusk—
full of clouds and gloom—
has dissolved into
multitudes of stars!

When the inscription was finally inscribed on the back of the stone in early November, my mother and I drove over to the cemetery. As we approached the stone, I felt a strange pang within my stomach. There it was—my name, engraved in white into the granite. There was my birth date. And there was my identity: Priest •Poet. Finally, there was the stanza I wrote—my epitaph. The only thing missing was a date for my death.
As I stood there, I could very easily imagine that this was where my final remains would come to rest. If ever there was ever a good place to lie, it was that place. It was a good place to leave behind what remained of me.

Later, I wrote the poem “Ash—the Loam” about the buying of my gravestone. It was an easy, effortless kind of poem and because it was, it was a rarity as well.

It will happen—whether creeping
up, lethal and ugly, through my body or
in some merciful instant I can neither plan for

nor even, at this moment, imagine. When it does,
do this for me if you will—bury my ashes here
in the cool shadow of the black granite stone

my father and I set into place just
a few autumns ago. Bury them here—
where the black loam, broken

by the neighbor’s pole digger, will
yawn open for the urn and take it
into its silent embrace. I can’t imagine

gust, nor sealed up in a sterile
marble vault in the cathedral. This will
do. This appeals to me. When I

think beyond that last exhausted breath
I can easily imagine
whatever’s left still here, even

in that inconceivable future, set here
by those I loved and will probably
still love in some way I can only

if I am able to be pleased and able too
to observe it from some place near
and yet not so near. How often I stood

on the lip of someone else’s grave
and thought of my own far-off (or so
I thought) burial. It is not fear or apprehension

I feel when I think of it but
completeness. Ash—the loam—
the prayers so familiar I could

pray them for myself before sleep—
yes, this is what I want. Bury my ashes
and leave them in this place I have come to

love with an affection only one
who loves the earth in just this wonderfully
perfect way can ever fully understand.

“In heaven, it is alwaies Autumne,” John Donne preached one Christmas four hundred years ago. And I think he was right. In my mind, it is always autumn-like in that little churchyard—a beautiful deep golden season. And conversely, whatever awaits me beyond that cemetery I can’t help but believe is similar. In my mind I imagine it as an almost perfectly inconceivable golden autumn that never ends.
Posted by Jamie Parsley+ at 6:01 PM