So long, Leisha; we will sure miss you! 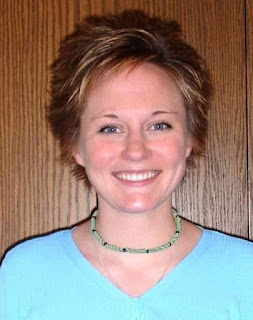 On Tuesday, April 2, Leisha Woltjer, long-time Diocesan Administrator, announced her resignation from the Diocese, effective April 30. Her last day will be April 26. With her resignation on the heels of Bishop Michael’s, which becomes effective on May 1, it is truly the end of an era in the Episcopal Diocese of North Dakota.

Leisha began working for the Episcopal Church in April, 2002, when she was hired as the secretary of Gethsemane Cathedral. I was, at the time, preparing for my ordination to the transitional diaconate at Gethsemane and was in the office the day Leisha started. I still remember when I came in that day and saw a fresh-faced young woman at the front desk who had never worked in a church environment before. Later, she would describe her time as secretary as a true baptism by fire. In that time, she truly saw both the best and the worst of the Church.

Over the years, Leisha and I worked closely with each other, both at Gethsemane Cathedral and later in the Diocese office. While at the Cathedral, we saw Deans and transitional Deans come and go. We worked on funerals and weddings together. Many jokes were shared and much laughter filled the office, oftentimes with a Dutch version of the pop song “Barbie Girl” blaring from the computer. I remember clearly how she would put intentional mistakes in bulletins for me when I was proofreading them just to make sure I wasn’t just skimming them. Oftentimes we had very bizarre experiences happen: at one point, we both became victims of a seriously deranged stalker who hung around the cathedral; my car was keyed multiple times and Leisha’s purse was stolen.

In 2009, when Bonnie Bernardy resigned as Diocesan Business Manager, Leisha moved across the hall from Gethsemane Cathedral office to the Diocesan office, becoming the new Finance Manager, after having attained a degree in accounting while working at Gethsemane.  At that same time, I became Bishop Michael’s Executive Assistant. Over the next three years, Leisha and I worked side by side in the Diocese, oftentimes under as equally unusual circumstances as we had at the Cathedral . One memory in particular stands out when, during the April 2009 flood in Fargo-Moorhead, Leisha and I were manning the Diocesan Office at a time when only “essential workers” were allowed on the streets. As sirens wailed and the city took on the feel of a ghost town, we fielded calls and wondered if she would be able to make it back home to Sabin safely.

After my resignation as the Bishop’s Executive Assistant in 2012, Leisha assumed most of the responsibilities I had, including editing The Sheaf which I had edited for 10 years.

For many of us, Leisha has been the voice and face of the Diocese and with her departure, it will seem strange not see her or hear her voice on the phone.   I will miss seeing her at the table handing out packets at Diocesan Convention. I will especially miss the care and devotion she had to many of us.

I know that I speak for many of us in the Diocese when I say that Leisha has been a feisty, strong-willed but truly incredible and genuinely caring person in her position in the diocese. She was just the person for the job at just the right time. Her dedication and attention to detail will be deeply missed.

Leisha, we all wish you the very best in your future endeavors. And know that you go from here with all our blessings, gratitude and best wishes surrounding you and remaining with you.